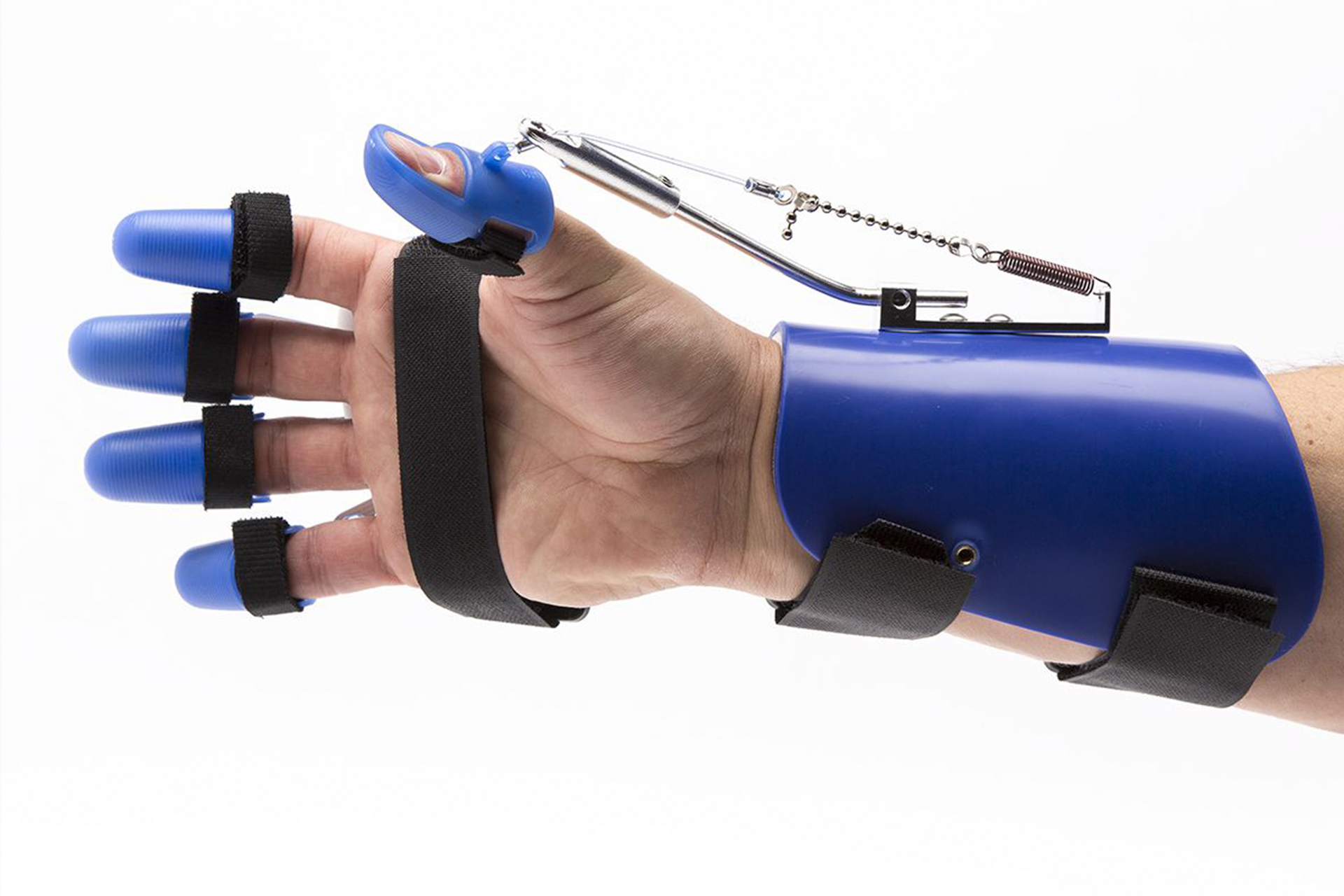 Am I appropriate for SaeboFlex treatment

How can I arrange a SaeboFlex assessment

How does the SaeboFlex work

What are the benefits of the SaeboFlex

"I am thrilled with my SaeboFlex results. Three weeks ago when I was fitted with my SaeFoflex, I could not grip, let alone squeeze the grip strength meter. It was listed as 'Not tested'. Yesterday after three weeks of work, I easily gripped the grip strength meter and tested at 20 lbs grip strength! My index/thumb pinch strength went from 'Not tested' to 7 lbs! The SaeboFlex really woke up the muscles in my hand and forearm. I can now open up a round, single wrapped string cheese snack with my two hands. Last night I was able to open the inner plastic lining of a cereal box with my two hands. It is a real joy to have the use of two hands again. I am still working on finger dexterity and strengthening, but am confident I will achieve my goals. After my first week, my OT asked "well, how is it going"? I said let me shake your hand. I did, she winced in pain, then smiled, then laughed with my wife and I. Thank you SaeboFlex!"

"I wanted to let you know how excited I am with the results of my SaeboFlex unit. In less than a week, I am now able to extend all my fingers on my left hand to nearly straight. I am a very motivated person and was getting very depressed about not being able to use my left hand for 11 months now after my stroke last August. I was completely paralysed on my left side for five months. I was able to stand again during therapy and start walking soon after with a cane. Finally, I am seeing amazing results in just a week from your system. I also am seeing some shoulder movement at the same time. I now feel that a full recovery is more than possible for me. I do want your customers to know that I have worked very hard from the first day after my stroke last August. I am 62 years old, and it has been the most difficult thing I have ever done in my life, but the thought of not being able to do the things I love was ever more unbearable to me. I am retired and before my stroke my wife and I travelled the country in our motor home. We now think that could resume that in the near future. Thanks again for providing me with an excellent device, but mostly for giving me hope again".

"In 1984 when I was 26 almost 27 years old, after the birth of my youngest daughter, Jana, I had a major stroke. In my pregnancy, I developed a blood clot somewhere in my body. When Jana was 4 months old, I had a major stroke. Through rehab and the good Lord I made it this far. The SaeboFlex is just a huge, unbelievable blessing to me!! Immediately, after 19 years post stroke, I could squeeze and release with my right hand! What a huge blessing! It was quite a thrill after so much inactivity!! By the end of my first week I was able to pick up 15 racquet balls, without the SaeboFlex, and place them in a tall container. Because of the SaeboFlex I am now able to do things with my affected side that I could have not done before. I am able to put on deodorant, wash in the shower with both hands, hold a hymn book with both hands, pick up objects off floor, eat a banana with my affected side, and open mail with both hands. I encourage any and every stroke victim to take this training. My desire in the near future would be that every hospital and rehabilitation clinic in the world would have this knowledge and capability for helping stroke victims."

"This December will be my 16th year out from the severe stroke that causes my health problems. I have recovered remarkably and made such wonderful progress. However, like so many, I watched my affected hand and arm and wished it would join in the activities of my life. But, alas, it sat motionless for many years. Therapists and doctors only echoed their belief that I had reached a certain "plateau" and should not expect further gains. That is until I discovered Saebo.

At first, I admit I was very sceptical. I thought, "Yeah, right, another money grabber". I decided to try the program, but was still pretty sure it would only lead to further frustration. I went for measurement and was reassured with optimism that it works. I took that with a pinch of salt, but decided to give the Saebo my best effort...only if for a short while. It took about two weeks for my Saebo to arrive, and I went in for my fitting and first session. Objective yet excited, I put this blue, spring, fish line, bead chain on my arm. I began to get that old sinking feeling, and felt I was set up for a big let down.

We started our therapy session, and darned if I did pick up one of those coloured poof balls. But more amazingly, I could let it go. Now, this was not the precise, deliberate movement from one with ample dexterity, but I was doing the moving on my own. Though modest, it was movement. My biggest surprise came at home about two weeks later and after about three Saebo sessions. I was sitting in my chair and happened to look down at my arm. I was actually clinching my fist. Something I had not been able to do for over a decade. I was absolutely elated. I think I called everyone and told them about this miraculous movement. With more therapy sessions, and diligent home exercise, I began to see more and more arm and finger movement. I could wear the Saebo and feel the muscles reacting to my commands. It was wonderful. Now, I have been an engineer for most of my life. I know about dynamics, energy, potential energy, kinetics, and other "stuff" dealing with motion and things at rest. I do not know how it works....why it works...and do not care...IT WORKS! I try to use my Saebo at home as often as I can. I am still tracking new movement. Mind you, it is modest, but it is movement. No one at Saebo has ever told me about reaching a point where my arm would not react..."plateau". I have been able to retain some of the movement even without my Saebo, and now I am putting my arm back into the daily routine of living. I still surprise myself at things my arm will do. With new improvements and adjustments, I can for see future development of more uses.

Experience of nearly 16 years as a stroke survivor makes me a bit of an expert in that area. Without a doubt, the SaeboFlex has been one of the best devices I have found for therapy of my affect arm and hand. I surely recommend it to everyone. I know that result from the Saebo will vary from person to person. But if one puts forth effort, he/she may well expect commensurate reward out!"

"Thomas suffered a stroke while at school back in January 2004 at only age 7 and a half. His stroke affected his cognitive abilities as well as his right side. The most affected being his right arm and leg. He seemed to recover almost fully with his cognitive abilities with just a little articulation and word finding difficulties. His leg and foot are still improving. He is able to skate, ski, and run. He uses an AFO for walking, but he does well.

His right hand and arm was most affected. While surfing on the net one day, I stumbled across Saebo. I was very cautious but very interested in what Saebo was claiming to be able to do for stroke survivors like my son Thomas. We had tried everything for him. Muscle stimulation, deep muscle stimulation while he slept, OT, and physiotherapy and Speech Therapy. Thomas' OT seemed to focus more on weight bearing and stretching than trying to improve his right hand and arm so as we could get some function back. However, what Saebo was offering seemed more on what we had wanted for our son's recovery.

Thomas was amazed. He put the SaeboFlex on and for the first time since his stroke, and he was able to pick up balls, and release them. His expression on his face said it all. It was like Christmas morning. He was so happy, and for the first time it had given us all hope once again that things with his right arm could change.

For the next year, Thomas used the SaeboFlex 45 mins before school doing crate left and crate right and 45 mins in the evening doing an exercise. He has remained motivated and continues to use the SaeboFlex now, going into our second year. He never gives up and does it diligently every day with the exception of the weekend. This is his time; after all, he is still a child and needs to do kid stuff too.

Thomas' improvements have been HUGE!! He is now able to put his arm out his side, and lift up. Pick up items, and release them even without the device on. He holds bottles in his right hand while he unscrews lids with his other. He is able to swing a baseball bat with both hands, ride his ATV without his hand falling off all the time. He is able to open fridges and doors, and just recently, he was able to use his pointing finger and thumb to play his beloved XBOX.

Thomas will continue to use the SaeboFlex because he is still improving, and we will not give up on him. It takes a lot of time and energy on all of us but the payoff is worth it. After all, we are all Thomas has and if we give up on him what does he have left. Thomas is just a little boy with big dreams, and it is our job as parents to help him achieve those dreams. I do not know where we would be without this device.